Home›News›Breaking News:Underground U.S Government Elite Bunker - Why Are So Many Of The Super Wealthy Preparing Bug Out Locations?[VIDEO]

Breaking News:Underground U.S Government Elite Bunker - Why Are So Many Of The Super Wealthy Preparing Bug Out Locations?[VIDEO] 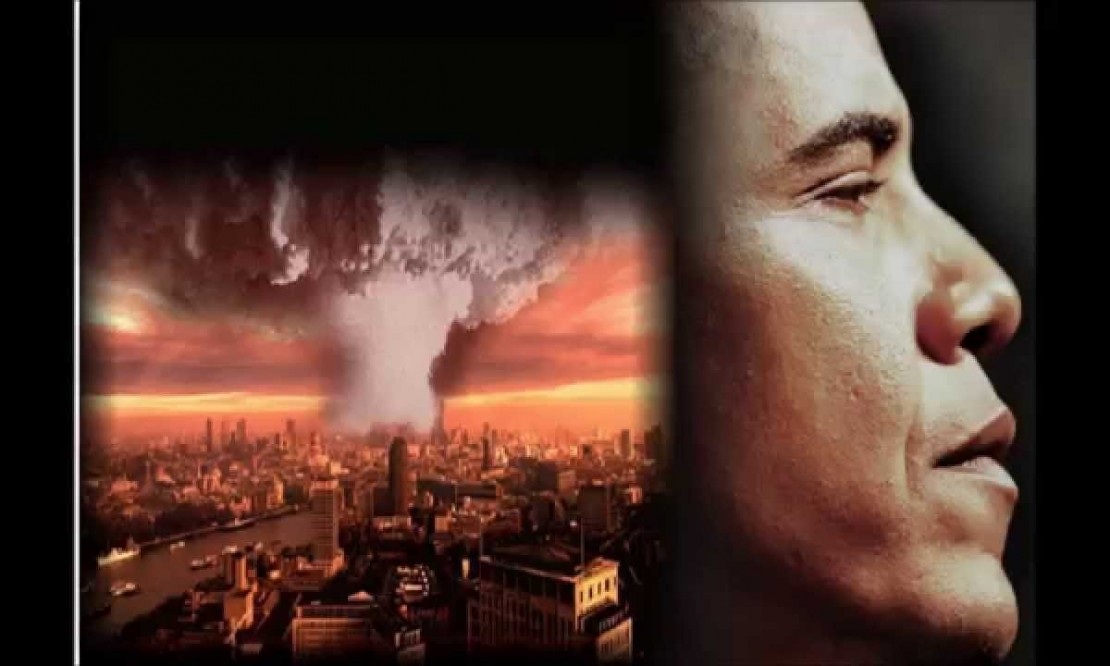 It's the end of the world as we know it.

But you'll be fine.

The invitation-only survival bunker is described as the world's "ultimate doomsdayescape", and can withstand "nuclear blasts, chemical agents, earthquakes and tsunamis".

1. The American family who is building a doomsday castle to survive the apocalypse. 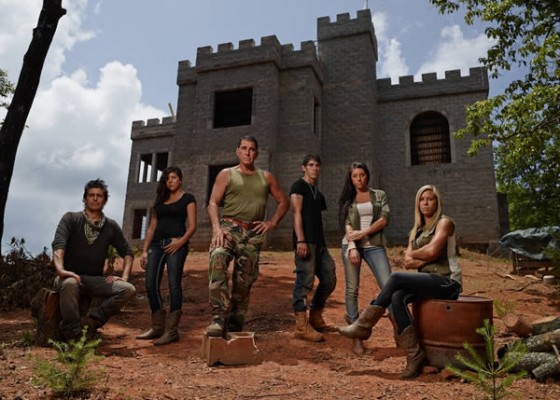 Atop a large foothill deep in the woods of North Carolina, a family of doomsday preppers are getting ready for the impending end of days. They are learning to use medieval weapons like crossbows and catapults, and building a fortified castle that will protect them from marauders and scavengers. Brent Sr., a retired infantry officer, got into doomsday prepping back in 1999, convinced that the predicted Y2K computer glitch would unleash chaos and bring about the end of civilization as we know it.

Soon after Y2K, Brent Sr. drafted his children into helping him build the super-fortress of his dreams. He now believes the world as we know it will come to an end as a result of an EMP that will be caused either by a nuclear explosion or a solar flare similar to the one that occurred in 1859. That’s why a medieval castle, where electricity is not needed to survive seemed like the perfect choice for a shelter. When his worst fears finally come true and it’s every man for himself, the Doomsday Castle will be the only thing keeping marauders at bay. His kids are unsure the end will actually come during their lifetime, but they just want to be prepared, and joke that even if there is no doomsday, at least they’ll all have a “nice vacation house.” But prepping is no joke to Brent Sr., and he has set up a 100-year trust so the castle can’t be sold if something were to happen to him. “Each kid will get the castle for five weeks every year,” he said during an interview with LiveScience

2. The luxurious underground house in the Swiss Alps that doubles as a bunker 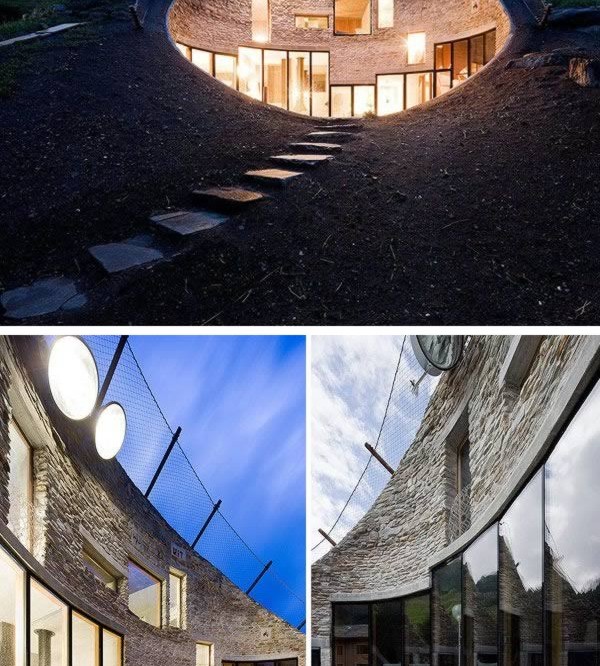 Vals in the Swiss Alps is the setting for this amazing underground holiday home known as Villa Vals.

The architectural design studios SeARCH and CMA are behind this wonderful design concept.

The only way that it was possible to build such a contemporary property within this area of outstanding natural beauty was to completely integrate the construction into the landscape.

The ‘entrance hall’ to the property is actually a separate traditional wood shed which is connected to the villa by an underground tunnel.

The villa which can accommodate up to ten people is available for holiday lets through the Villa Vals website.

3. The survival shelter that claims to be the most secure real estate in the world 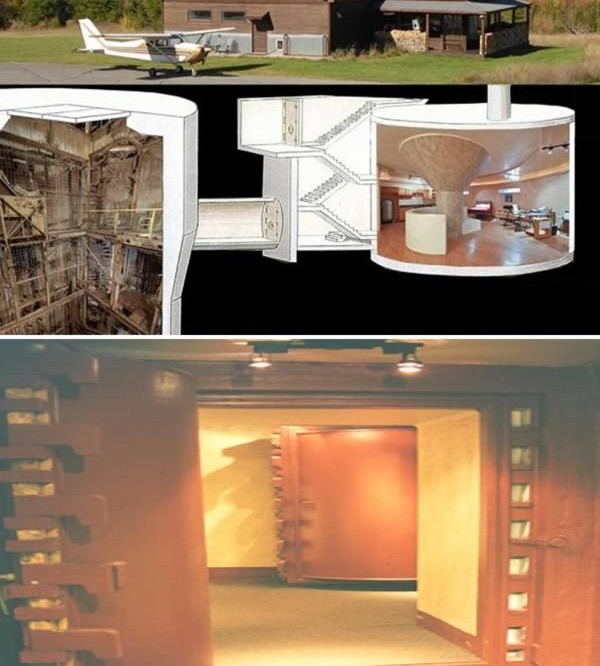 During the late 1950’s and early 1960’s when the Cold War was in full effect, the U.S. government built hundreds of Atlas-F missile silos to prepare the country for an attack that never came. Today, most of these silos lie abandoned and filled with water – monuments to a bygone era of American history left to waste.

Thanks to two entrepreneurial cousins, Bruce Francisco and Gregory Gibbons, one of these silos located in beautiful Adirondack State Park near Lake Placid, NY is finding new life as a luxury home, safe haven and getaway complex accessible by plane or car.

Above ground, the Silohome features a hangar and spacious open living room with a fireplace and a wraparound porch. Below ground in what was once the launch control center is now two levels and features 3 bedrooms, 2-1/2 baths, and an open living area and kitchen adjoined by a spiral staircase. Past the former LCC, nine additional levels protrude further underground, making up the 12,000 square feet that was actual missile storage space. The home also includes 20 acres of land with another 78 acres available as 10 approved building lots.

The Silo House is on the market for $1.76 million for those taking their doomsday preparations seriously.

4. The vault created to preserve seeds in case of a major catastrophe 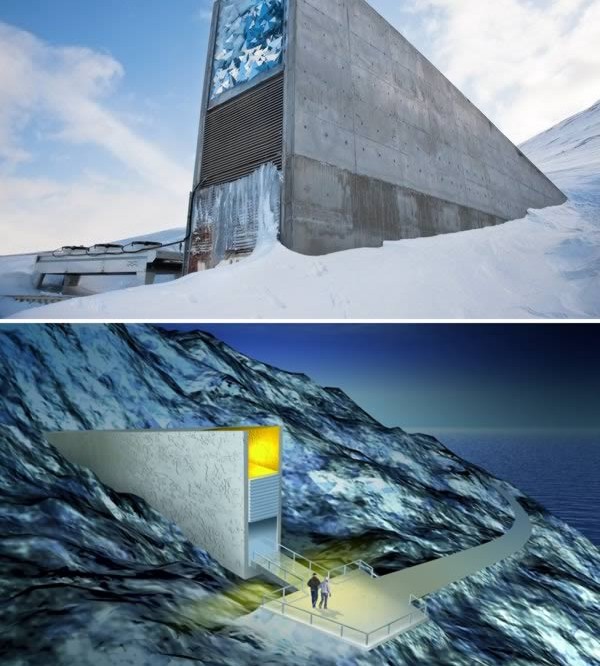 The Svalbard Global Seed Vault  is a secure seed bank on the Norwegian island of Spitsbergen near Longyearbyen in the remote Arctic Svalbard archipelago, about 1,300 kilometres (810 mi) from the North Pole.Conservationist Cary Fowler, in association with the Consultative Group on International Agricultural Research (CGIAR), started the vault to preserve a wide variety of plant seeds that are duplicate samples, or “spare” copies, of seeds held in gene banksworldwide. The seed vault is an attempt to insure against the loss of seeds in other genebanks during large-scale regional orglobal crises. The seed vault is managed under terms spelled out in a tripartite agreement between the Norwegian government, the Global Crop Diversity Trust (GCDT) and the Nordic Genetic Resource Center (NordGen).

The Norwegian government entirely funded the vault’s approximately NOK 45 million (US$9 million) construction. Storing seeds in the vault is free to end users, with Norway and the Global Crop Diversity Trust paying for operational costs. Primary funding for the Trust comes from such organisations as the Bill & Melinda Gates Foundation and from various governments worldwide.

5. The $ 2 million condos in Kansas dubbed the most luxurious way to sit out the apocalypse 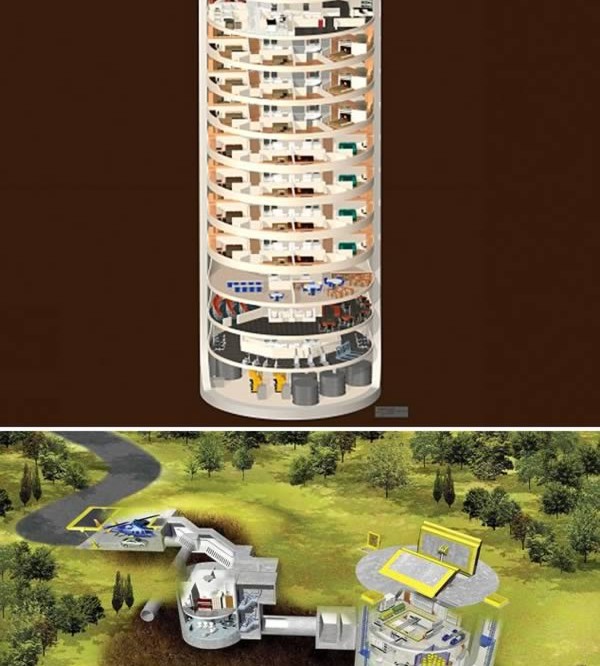 It has been billed as the most luxurious way to sit out the apocalypse – and now there is a waiting list for the $2 million apartments in an abandoned missile silo in Kansas.

Perhaps the buyers know something we don’t.

The luxurious condos come with all the mod-cons, as well as a pool, a movie theater and a library – oh, and a guarantee that it will survive Doomsday if and when that fateful day comes.

For these luxury flats, deep below the Kansas prairie in the shaft of an abandoned missile silo, are meant to withstand everything from economic collapse and solar flares to terrorist attacks and pandemics.

Naturally, there will be no one around to phone if the guarantee fails – but at that point, the insurance will probably be the least of your worries.

So far, four buyers have thrown down a total of about $7million (£4.4m) for havens to flee to when disaster happens or the end is nigh. And developer Larry Hall has options to retro-fit three more Cold War-era silos when this one fills up.

6. The bunker constructed under a luxury resort 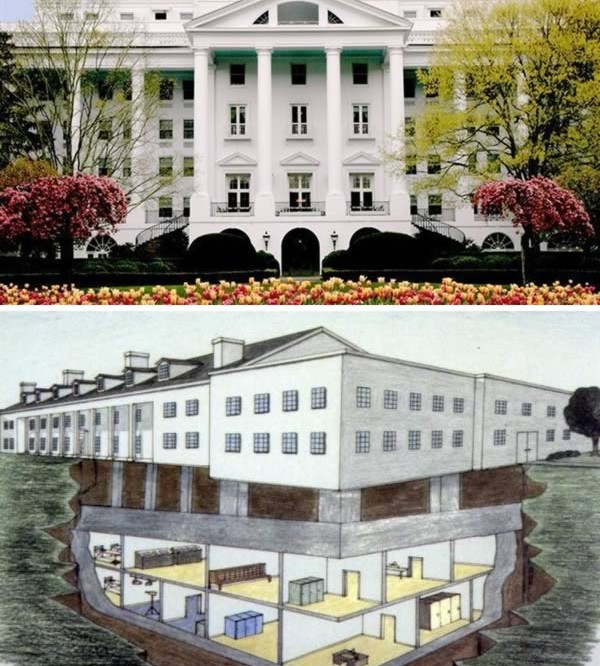 During the Cold War the United States government maintained a top-secret underground bunker in the mountains of West Virginia. Built under The Greenbrier, a luxurious Southern resort, the facility was designed to house the members of the House of Representatives and the Senate in case of nuclear attack. Compromised by an investigative reporter in 1993, the bunker is now open to the public.

With the code name “Project Greek Island”, it remains a sobering reminder of how America lived with and prepared for the possibility of a Soviet nuclear attack. You can enter the bunker or you can read an interview with Fritz Bugas, former on-site Superintendent of the Greenbrier bunker.

7. The luxury home that boasts a bunker 26′ underground with fake grass and simulated night and day. 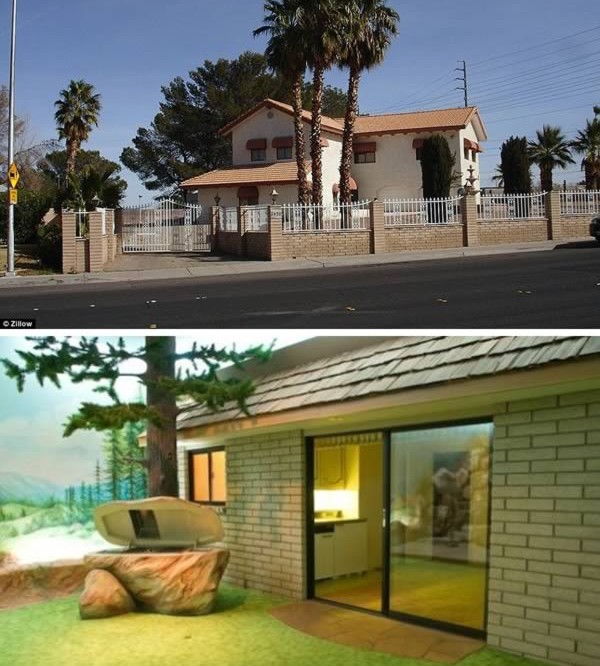 From the street, 3970 Spencer St. near Flamingo Road in Las Vegas looks like any other American home. It’s what lies beneath that would pique your interest. This home features a 15,200 sq. ft. underground living area that is reminiscent of the 1999 film Blast from the Past, in which a family lives in a fallout shelter for 35 years.

The house built by businessman Girard “Jerry” B. Henderson is essentially a time capsule from the 1970s. Mr. Henderson showcased his subterranean home in style with pink kitchen trim, pink toilets, green AstroTurf, fake trees and a painted backdrop depicting rolling hills in the countryside.

There are even a host of activities for you to pass slow time with while waiting for any (nuclear) dust to settle. The “garden” includes a four-hole putting green, a swimming pool, two hot tubs, a sauna, a dance floor, a bar, a BBQ grill (disguised in a rock) and adjustable light settings for different times of day. The stars still come out at night!

After Mr. Henderson and his wife died in the 1980s, a relative took over the place. The most recent owner lost the home through foreclosure and it is currently on sale for $1.7 million.

8. The billionaire’s bunker that is equipped with panic suite 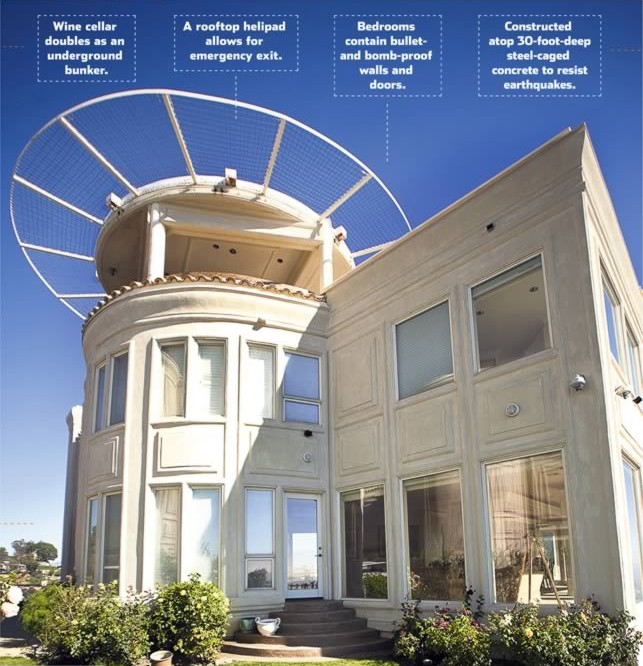 Al Corbi’s residence in the Hollywood Hills has the requisite white walls covered in artwork and picture windows offering breathtaking views of downtown Los Angeles, but it has more in common with NSA headquarters than with the other contemporary homes on the block. The Corbi family doesn’t need keys (thanks to biometric recognition software), doesn’t fear earthquakes (thanks to steel-reinforced concrete caissons that burrow 30 feet into the private hilltop) and sleeps easily inside a 2,500-square-foot home within a home: a ballistics-proof panic suite that Corbi refers to as a “safe core.”

9. The Chinese man who built his own version of Noah’s Ark 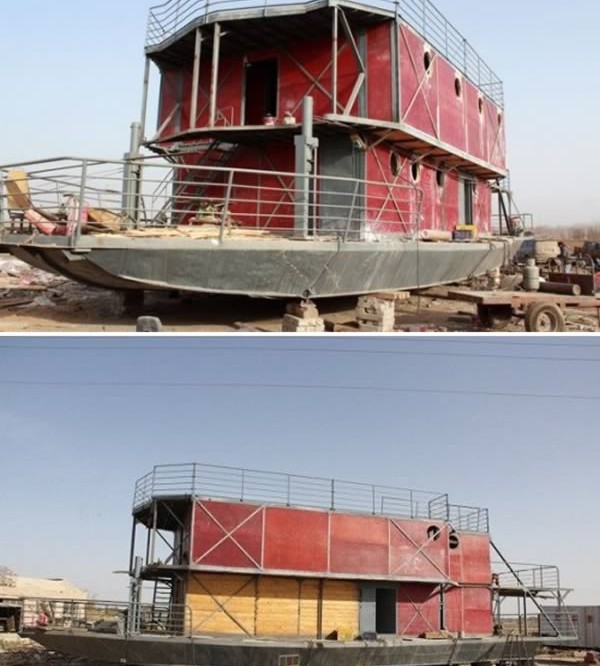 Worried about the impending 2012 “Mayan apocalypse,” a man in China has reportedly spent his life savings on the construction of his very own “Noah’s Ark.”

According to China News Service, Lu Zhenghai, from the Xinjiang Uyghur Autonomous Region in northwest China, has already spent about $160,000 on the boat. The vessel, designed by Lu himself, measures about 65 feet in length and will, when completed, weigh about 80 tons, the report states.

Lu said he began building his so-called ark in 2010 out of fear that an impending “doomsday” flood would threaten his and his family’s survival.

“I’m afraid that when the end of the world comes in 2012, flood waters will destroy my house,” Lu told the Chinese News Service, according to a HuffPost translation.

“So I took all my savings and invested in the construction of this boat,” he continued. “When the time comes, everyone can take refuge in it.”

Chinese news website FMN reports that Lu’s “ark” was built with 10 tons of timber and 60 tons of steel. Due to lack of funds, however, it has yet to be completed. 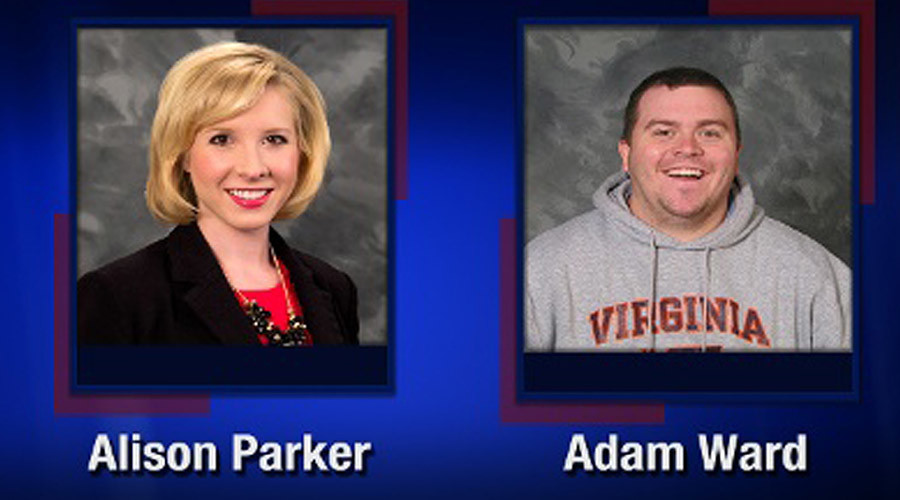