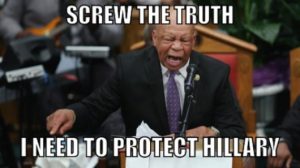 One of Democrats’ main talking points in trying to discredit the investigation into the September 2012 Benghazi attack that killed four Americans is that it’s a purely politically driven attempt to discredit former Secretary of State Hillary Clinton in the heat of her run for president.

Given that criticism, it’s curious — though not at all surprising — that the Dems chose to preemptively release their own version of a Benghazi report ahead of the one to be released by Republicans, in an attempt to debunk the GOP report’s claims in advance. Can you think of any reason for doing such a thing that isn’t patently political?

And, of course, it’s not surprising in the least that the Democrat report fully exonerates the Queen for her role in both what happened during the attack and after the attack, despite evidence to show otherwise — which will no doubt be outlined in detail in the forthcoming Republican version of the Benghazi report.

But what may be surprising — particularly if the Democrats are arguing a high ground when it comes to keeping politics out of a matter like Benghazi — is whose name shows up frequently in the report.

Presumptive GOP nominee Donald Trump is mentioned 23 times more than the combined number of references to Tyrone Woods and Glen Doherty, two of the former Navy SEALs killed in the Sept. 11, 2012 attacks.

As the Daily Caller reports:

That total is more than the combined number of references to Tyrone Woods and Glen Doherty, two of the former Navy SEALs killed in the Sept. 11, 2012 attacks. Ambassador Chris Stevens, who was also killed during the onslaught, is mentioned 85 times in the report, according to Republicans on the Select Committee.

Sean Smith, a State Department information specialist who also died in Benghazi, is named 36 times in the report, which the Democrats released along with transcripts of interviews of dozens of witnesses interviewed during the Committee’s investigation.

Democrats, led by Maryland Rep. Elijah Cummings, have accused Republicans of using its investigation to target Clinton politically. The report asserts that Clinton was “active and engaged” during and after the Benghazi attacks. They also say that the investigation has been a waste of taxpayer dollars.

Republicans, whose report will be published soon, have accused Democrats of stonewalling the investigation. Democrats have not interviewed any witnesses about the attacks or the security measures in place beforehand, Republicans say.

“As Chairman Gowdy has said, this is not about one person. This investigation is about the four brave Americans we lost in Libya: Chris Stevens, Sean Smith, Tyrone Woods, and Glen Doherty,” Benghazi Committee spokesman Matt Wolking said in a statement.

How on earth did the 2016 presumptive GOP presidential nominee end up in a report on something that happened in 2012, to which he had not the slightest connection?

As Mediaite reports, most of the uses of the GOP presumptive nominee’s name come in the form of debunking claims he has made in interviews about the former Secretary of State’s role in the attacks.

So, the Democrats are, quite literally, using their Benghazi report to further their own agenda in the 2016 election.

Pretty hard for the Democrats to argue their report isn’t 150% about politics and, specifically, using taxpayer dollars to help the Democrat anointed one limp her way into the White House.

Repel Mosquitoes with These Plants : Citronella, ...