Home›End Of The Days›Russian Aircraft Carrier And Sub Headed For British Waters, UK Prepares To Intercept Russian Warships In Route To Syria 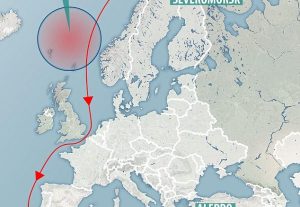 Pictures have emerged of Russian warships sailing towards Britain as they make their way to Syria.

Norwegian Armed Forces captured images of a fleet of Russian warships sailing off its coastline, including an aircraft carrier, submarine and nuclear powered battleship.

It comes just days after the Royal Navy was put on red alert after it was revealed that Russia planned to send a fleet of warships along the British coast as they made their way to the Mediterranean.

An MOD source told MailOnline today that the ships were still north of Scotland but were expected to head toward the Channel 'within days'. The Russian fleet, which includes the 55,000-tonne aircraft carrier Admiral Kuznetsov, will 'be escorted by a Navy destroyer', the source said. 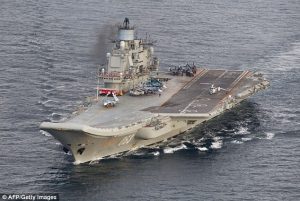 Pictures have emerged of Russian warships sailing towards Britain as they make their way to Syria. Russian aircraft carrier Admiral Kuznetsov is pictured passing the Norwegian island of Andoya in international waters 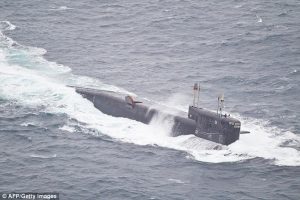 Norwegian Armed Forces captured images of a fleet of Russian warships sailing off its coastline, including an aircraft carrier, submarine (pictured) and nuclear powered battleship 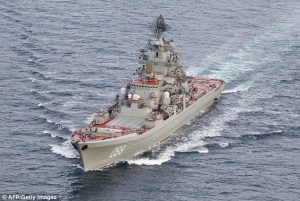 The Royal Navy was put on red alert after it was revealed that Russia planned to send a fleet of warships along the British coast. The Russian nuclear powered battleship Pyotr Velikiy is pictured above

Russia's flagship Admiral Kuznetsov and seven additional vessels will pass the UK on their voyage to the war-torn country as it prepares to bomb rebel forces in Aleppo.

The fleet is expected to carry out practice bombing north of Scotland before potentially sailing down the English Channel - a mile off the coast of Britain.

It comes amid rapidly escalating tensions between the west and Russia, as the Kremlin looks to give a show of strength right on the doorstep of the UK.

Two British warships, possibly HMS Duncan and HMS Richmond, will be deployed by the Royal Navy to escort the vessels past Britain,The Times reported.

The Russian ships departed from the naval port of Severomorsk.

Fellow Nato countries are expected to track the fleet's progress along Scandinavia, past the UK and into the Mediterranean, while British fighter jets will be on standby.

After arriving off the coast of Syria, the Kuznetsov is expected to take up position there for almost half a year.

The deployment comes amid tense relations between the UK and Russia, exasperated by comments made by Foreign Secretary Boris Johnson.

Mr Johnson was roundly criticised for his ‘shameful’ call call for anti-war protests over the bombing of Sryia outside the Russian embassy in London. 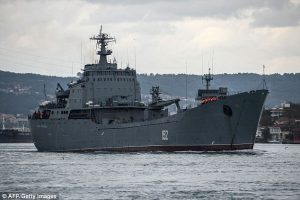 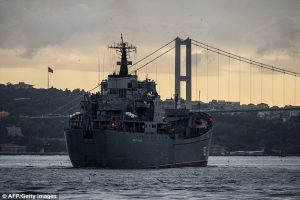 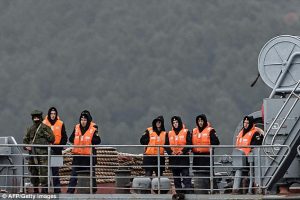 Sailors were shown wrapping up warm, pictured, aboard the ship as they head for Tartus, where Russia is poised to create a permanent naval base 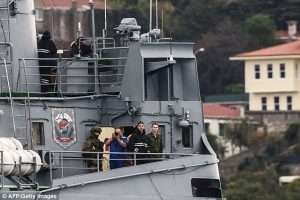 Russia accused him of ‘Russophobic hysteria’ and said his claims Moscow had committed ‘every deadly sin was a storm in a teacup full of muddy London water’.

It comes as many defence experts warned that Russia's economy appeared to be on a war footing.

Reports from Moscow suggested the Kremlin had ordered officials to fly home all relatives living abroad - with some residents claiming it is 'another step towards war'. 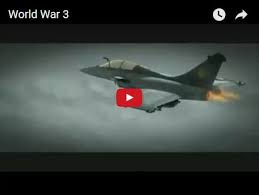 The Kremlin is said to have told high ranking officials to bring their loved ones back to the 'Motherland' immediately - with any who disobey being overlooked for promotion.

Relations with the West are rapidly deteriorating over Russia's role in the Syria conflict and just days after Putin moved nuclear-ready missiles closer to the border with Poland. 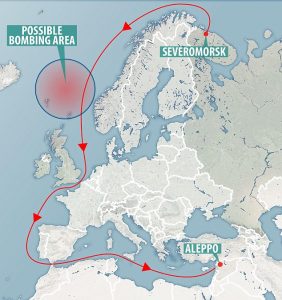 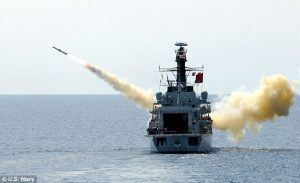 Two British warships, possibly HMS Duncan and HMS Richmond (pictured), will be scrambled by the Royal Navy to navigate the vessels past Britain 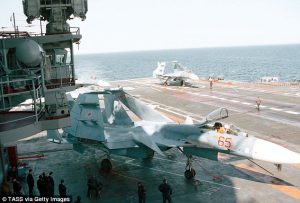 Admiral Kuznetsov, a heavy aircraft-carrying missile cruiser, is the flagship of the Russian Navy (pictured, sailors on the Kuznetsov's deck)

Putin also cancelled a planned visit to France amid a furious row over Moscow's role in the Syrian conflict and just days after it emerged the Kremlin had moved nuclear-capable missiles near to the Polish border.

Former Soviet leader Mikhail Gorbachev warned just days ago that the world is at a 'dangerous point' due to rising tensions between Russia and the US.

Moscow has been accused of posturing to the rest of the world by prepping civilians for potential war, instructing them to check on the availability of bomb shelters and gas masks.

In response, US intelligence officials told NBC News that the CIA is preparing for a possible cyber attack on the Kremlin to embarrass its leadership. 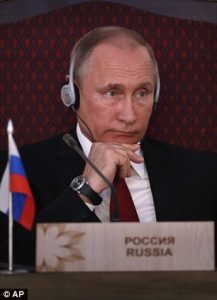 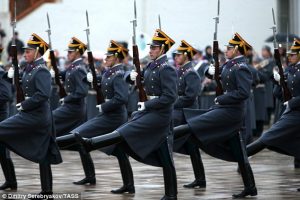 Many defence experts believe Russia is not intent on war but is instead throwing its weight around to deter western countries from intervening with Russian bombing in Syria.

Among the 'stunts' carried out by the Kremlin have been state-sponsored television guides on how to prepare in the event of an attack on Russian soil.

State-controlled media has also carried news bulletins warning civilians to familiarise themselves with the nearest bomb shelters and clarifying which government bodies would take command in the breakout of war.

Last week Russia moved nuclear-capable Iskander ballistic missiles into one of its regions on the Baltic Sea - prompting a fearful response from Poland and Estonia.

Russia says the missiles are being deployed as part of regular military manoeuvres to Kaliningrad, but it comes amid heightened tensions between the country and the West. 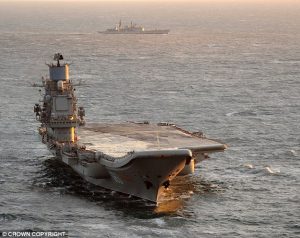 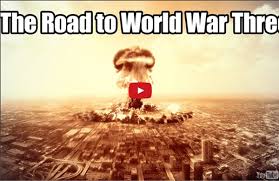 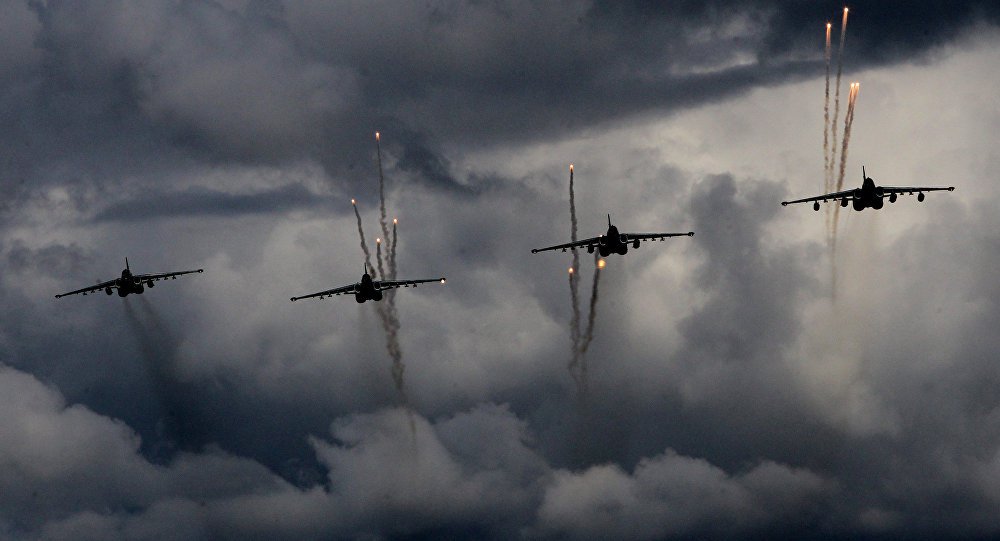 The UN Plans To Implant Everyone With ...