Home›News›RORATE CÆLI: Cardinal: "What Sister Lucia told me: Final Confrontation between the Lord and Satan will be over Family and Marriage."

RORATE CÆLI: Cardinal: "What Sister Lucia told me: Final Confrontation between the Lord and Satan will be over Family and Marriage." 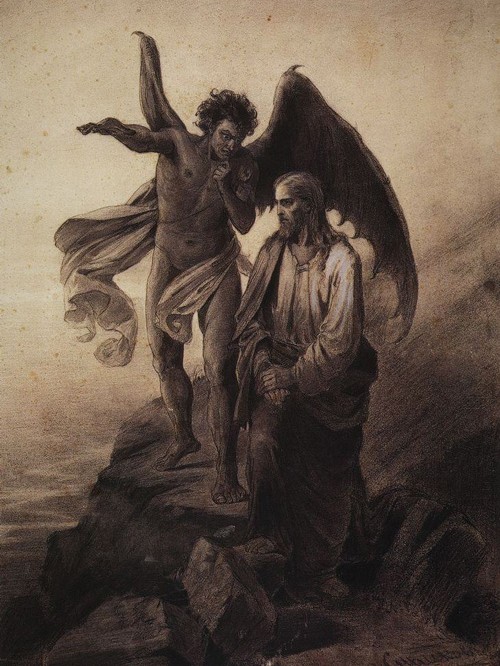 Sister Lucia: “Final Confrontation between the Lord and Satan will be over family and marriage”

A great post from Rorate today on Cardinal Caffara’s report of a conversation he had with Sister Lucia before her death.  Cardinal Caffara relates that Sister Lucia told him that the final confrontation between God and satan would center around the family and marriage.  That certainly seems to be a prophesy unfolding before our saddened eyes over the past several decades:

Q. There is a prophecy by Sister Lucia dos Santos, of Fatima, which concerns “the final battle between the Lord and the kingdom of Satan”. The battlefield is the family. Life and the family. We know that you were given charge by John Paul II to plan and establish the Pontifical Institute for the Studies on Marriage and the Family.
Yes, I was. At the start of this work entrusted to me by the Servant of God John Paul II, I wrote to Sister Lucia of Fatima through her Bishop as I couldn’t do so directly. Unexplainably however, since I didn’t expect an answer, seeing that I had only asked for prayers, I received a very long letter with her signature – now in the Institute’s archives. In it we find written:the final battle between the Lord and the reign of Satan will be about marriage and the family. Don’t be afraid, she added, because anyone who works for the sanctity of marriage and the family will always be fought and opposed in every way, because this is the decisive issue. And then she concluded: however, Our Lady has already crushed its head.

RELATED ARTICLE-RELEVANT:Blind Mystic Who Correctly Predicted 9/11 And ISIS Foresaw Something SHOCKING For 2016… 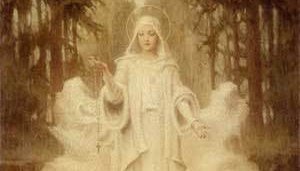 Talking also to John Paul II, you felt too that this was the crux, as it touches the very pillar of creation, the truth of the relationship between man and woman among the generations. If the founding pillar is touched the entire building collapses and we see this now, because we are at this point and we know it. And I’m moved when I read the best biographies of Padre Pio , on how this man was so attentive to the sanctity of marriage and the sanctity of the spouses, even with justifiable rigor on occasion.

One Peter Five also notes that Sister Lucia is hardly alone in making this prediction.  The incredibly specific revelations made by Our Lady of Good Success in Quito, Ecuador in the 1600s point to the same matter as being the crux of this final conflict:

“Thus I make it known to you that from the end of the 19th century and shortly after the middle of the 20th century…the passions will erupt and there will be a total corruption of morals… As for the Sacrament of Matrimony, which symbolizes the union of Christ with His Church, it will be attacked and deeply profaned. Freemasonry, which will then be in power, will enact iniquitous laws with the aim of doing away with this Sacrament, making it easy for everyone to live in sin and encouraging procreation of illegitimate children born without the blessing of the Church… In this supreme moment of need for the Church, the one who should speak will fall silent.”

“The one who should speak will fall silent……”  A disturbing prediction for all of us, but I would have to think this is a direct reference to the highest authority in the Church.

As I’ve noted on this blog a few times recently, Our Lady has been warning us most emphatically through the most remarkable series of apparitions ever witnessed that we are embroiled in the final struggle between Christ and all the forces of darkness.  Our Lady has warned us at Quito, Fatima, La Sallete, and Akita that the Church would enter an unprecedented time of division, error, apostasy, and persecution.  And our Mother has warned us that much of the hierarchy would fall into the most grievous of errors, or, even more, go over into a hostile and competing religion and one aligned with the false, demonic religion of the gentiles (all of whose gods are demons). In point of fact, our Lady also made this direct reference to the fall of most clergy: 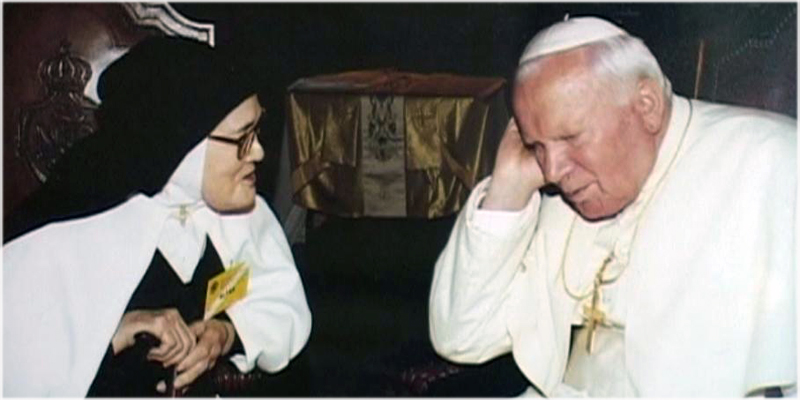 “The Sacred Sacrament of Holy Orders will be ridiculed, oppressed and despised. …The demon will try to persecute the Ministers of the Lord in every possible way and he will labor with cruel and subtle astuteness to deviate them from the spirit of their vocation, corrupting many of them. These corrupted priests, who will scandalize the Christian people, will incite the hatred of the bad Christians and the enemies of the Roman, Catholic and Apostolic Church to fall upon all priests. This apparent triumph of Satan will bring enormous sufferings to the good Pastors of the Church.…” [That’s always been at least somewhat the case, but there haven’t been too many times when the corruption of the priesthood has been as deep and all-encompassing as it is now]

Our Lady said, “…the secular Clergy will leave much to be desired because priests will become careless in their sacred duties. Lacking the divine compass, they will stray from the road traced by God for the priestly ministry, and they will become attached to wealth and riches, which they will unduly strive to obtain. How the Church will suffer during this dark night?Lacking a Prelate and Father to guide them with paternal love, gentleness, strength, wisdom and prudence, many priests will lose their spirit, placing their souls in great danger. This will mark the arrival of My hour.” 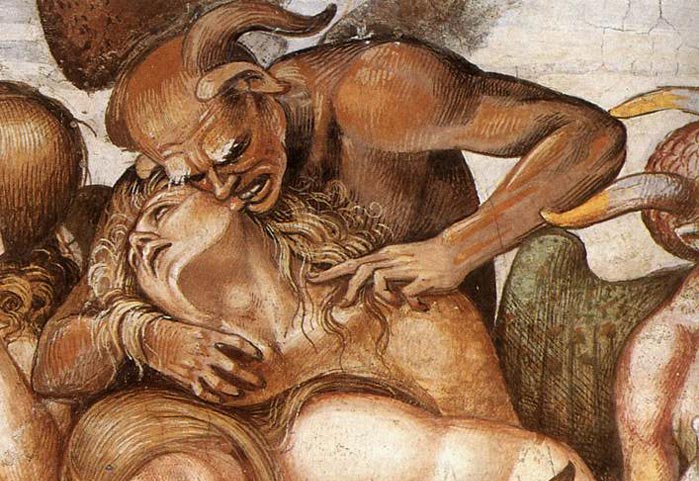 The reference to Freemasonry above is all the more remarkable because that benighted sect dedicated to the service of the world, the flesh, and the devil wasn’t even formally started until over 150 years after these apparitions occurred.

Where is our Saint Vincent? Where is our great Saint who travels the world preaching repentance and mortification? Where is the man proclaiming the end is near if we do not repent and convert? Has he been stifled? Where are the great Saints in the Church today (aside from every post-conciliar pontiff, naturally)?

I guess that’s why we’re in such a crisis. There aren’t many, if any, such Saints, or if they are, they are very well hidden.

Then the duty must fall to us, no? 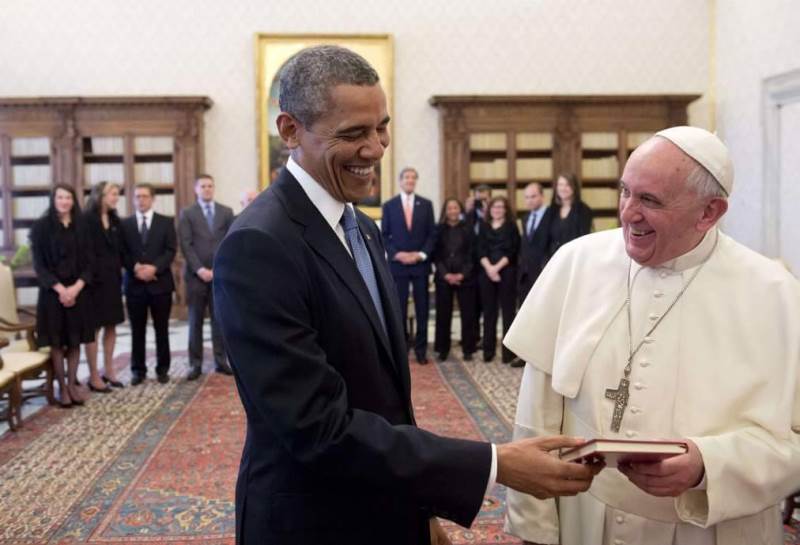 Our Own Government And Secret Church Leaders ...