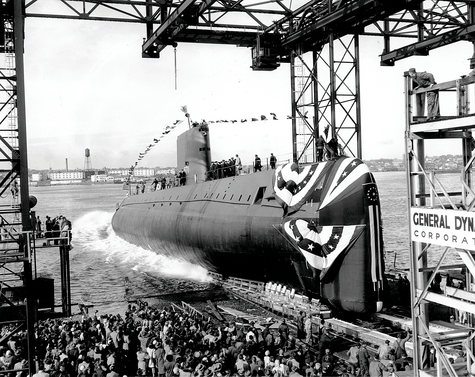 On Sept. 30, 1954, the world’s first nuclear-powered submarine, USS Nautilus (SSN 571), is commissioned at Groton, Conn. On Aug. 3, 1958, she is the first U.S. vessel to transit across the geographic North Pole. Decommissioned in 1980 and later designated a National Historical Landmark, Nautilus now serves as the historic ship at the Submarine Force Museum at Groton.

Construction of NAUTILUS was made possible by the successful development of a nuclear propulsion plant by a group of scientists and engineers at the Naval Reactors Branch of the Atomic Energy Commission, under the leadership of Captain Hyman G. Rickover, USN.

In July of 1951, Congress authorized construction of the world's first nuclear powered submarine. On December 12th of that year, the Navy Department announced that she would be the sixth ship of the fleet to bear the name NAUTILUS. Her keel was laid by President Harry S. Truman at the Electric Boat Shipyard in Groton, Connecticut on June 14, 1952.

After nearly 18 months of construction, NAUTILUS was launched on January 21, 1954 with First Lady Mamie Eisenhower breaking the traditional bottle of champagne across NAUTILUS' bow as she slid down the ways into the Thames River. Eight months later, on September 30, 1954, NAUTILUS became the first commissioned nuclear powered ship in the United States Navy. 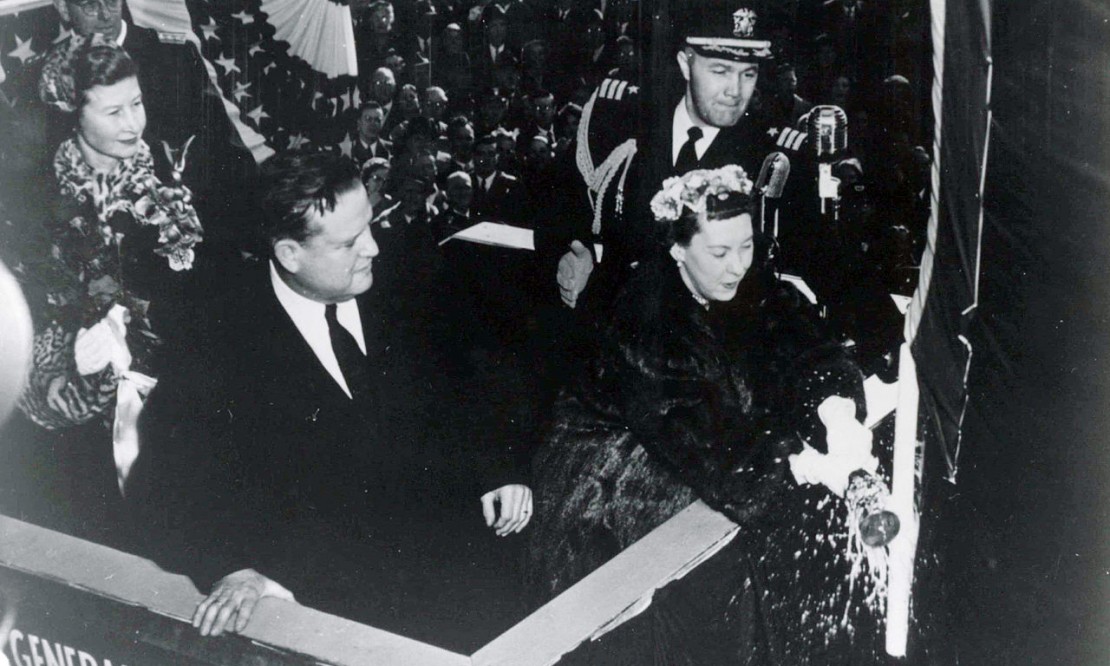 First lady Mamie Eisenhower breaks a champagne bottle on Nautilus' bow during the christening ceremony at the Electic Boat shipyard. Watching are John Jay Hopkins, left, president of General Dynamics Corp., which built the submarine, and Cmdr. Edward Beach, naval aide to President Eisenhower. Just before the first lady christened the boat, an EB worker high on a girder called out, "Hit it good and hard, Mrs. Eisenhower."

On the morning of January 17, 1955, at 11 am EST, NAUTILUS' first Commanding Officer, Commander Eugene P. Wilkinson, ordered all lines cast off and signaled the memorable and historic message, "Underway On Nuclear Power." Over the next several years, NAUTILUS shattered all submerged speed and distance records. 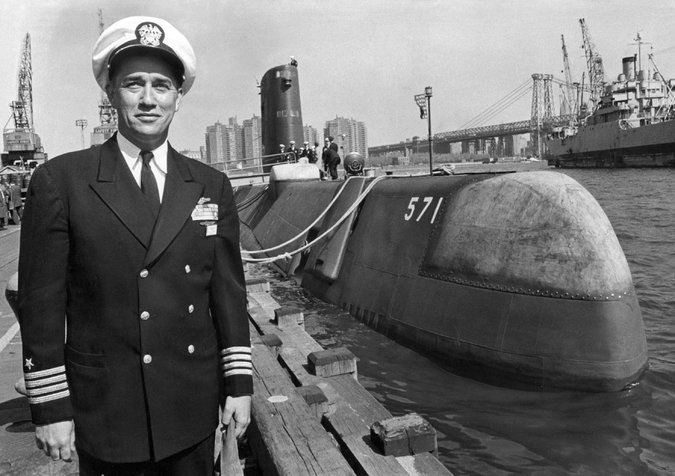 Vice Adm. Eugene P. Wilkinson, who commanded the Nautilus, the United States Navy’s first nuclear-powered submarine and the first machine to harness atomic fission for propulsion rather than weaponry, died on Thursday in Del Mar, Calif. He was 94.

His family confirmed the death.

As commander of the 324-foot, dirigible-shaped submarine, Admiral Wilkinson made headlines worldwide when he steered the Nautilus, propelled by its onboard reactor, out of a shipyard in Groton, Conn., into Long Island Sound on Jan. 17, 1955, and uttered his first radio message: “Under way on nuclear power.”

The vessel represented a historic technological achievement; a personal triumph for Admiral Wilkinson’s mentor, Adm. Hyman G. Rickover, the founding father of the nuclear Navy; and a resounding if double-edged statement about war and peace and the future uses of nuclear power. 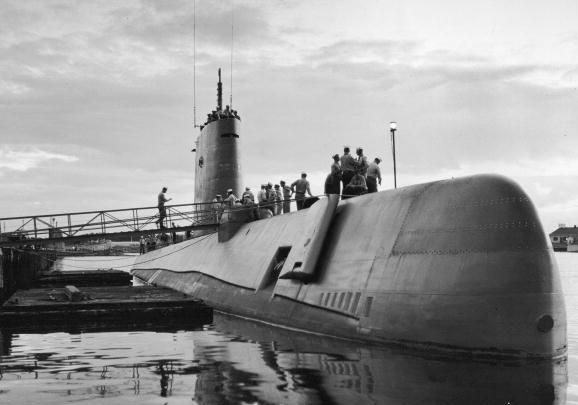 President Dwight D. Eisenhower saw in the Nautilus the commercial potential of nuclear power, a theme of his “Atoms for Peace” initiative in the years before the first commercial nuclear power plant was built in the United States, based on technology pioneered by the Nautilus.

Following her commissioning, Nautilus remained dockside for further construction and testing. At 11 am on 17 January 1955 she put to sea for the first time and signaled her historic message: "Underway on nuclear power."On 10 May, she headed south for shakedown. Submerged throughout, she traveled 2,100 kilometers (1,100 nmi; 1,300 mi) from New London to San Juan, Puerto Rico and covered 2,223 kilometers (1,200 nmi; 1,381 mi) in less than ninety hours. At the time, this was the longest submerged cruise by a submarine and at the highest sustained speed (for at least one hour) ever recorded.

From 1955 to 1957, Nautilus continued to be used to investigate the effects of increased submerged speeds and endurance. The improvements rendered the progress made in anti-submarine warfare during World War IIvirtually obsolete. Radar and anti- 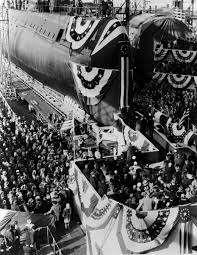 submarine aircraft, which had proved crucial in defeating submarines during the war, proved ineffective against a vessel able to quickly move out of an area, change depth quickly and stay submerged for very long periods.

On July 23, 1958, NAUTILUS departed Pearl Harbor, Hawaii under top secret orders to conduct "Operation Sunshine", the first crossing of the North Pole by a ship. At 11:15 pm on August 3, 1958, NAUTILUS' second Commanding Officer, Commander William R. Anderson, announced to his crew, "For the world, our country, and the Navy - the North Pole." With 116 men aboard, NAUTILUS had accomplished the "impossible", reaching the geographic North Pole - 90 degrees North.

In May 1959, NAUTILUS entered Portsmouth Naval Shipyard, Kittery, Maine for her first complete overhaul - the first of any nuclear powered ship - and the replacement of her second fuel core. Upon completion of her overhaul in August 1960, NAUTILUS 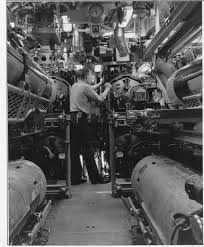 departed for a period of refresher training, then deployed to the Mediterranean Sea to become the first nuclear powered submarine assigned to the U.S. Sixth Fleet.

Over the next six years, NAUTILUS participated in several fleet exercises while steaming over 200,000 miles. In the spring of 1966, she again entered the record books when she logged her 300,000th mile underway. During the following 12 years, NAUTILUS was involved in a variety of developmental testing programs while continuing to serve alongside many of the more modern nuclear powered submarines she had preceded.

In the spring of 1979, NAUTILUS set out from Groton, Connecticut on her final voyage. She reached Mare Island Naval Shipyard, Vallejo, California on May 26, 1979 - her last day underway. She was decommissioned on March 3, 1980 after a career spanning 25 years and over half a million miles steamed. 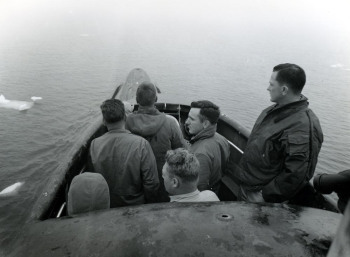 In recognition of her pioneering role in the practical use of nuclear power, NAUTILUS was designated a National Historic Landmark by the Secretary of the Interior on May 20, 1982. Following an extensive historic ship conversion at Mare Island Naval Shipyard, NAUTILUS was towed to Groton, Connecticut arriving on July 6, 1985. 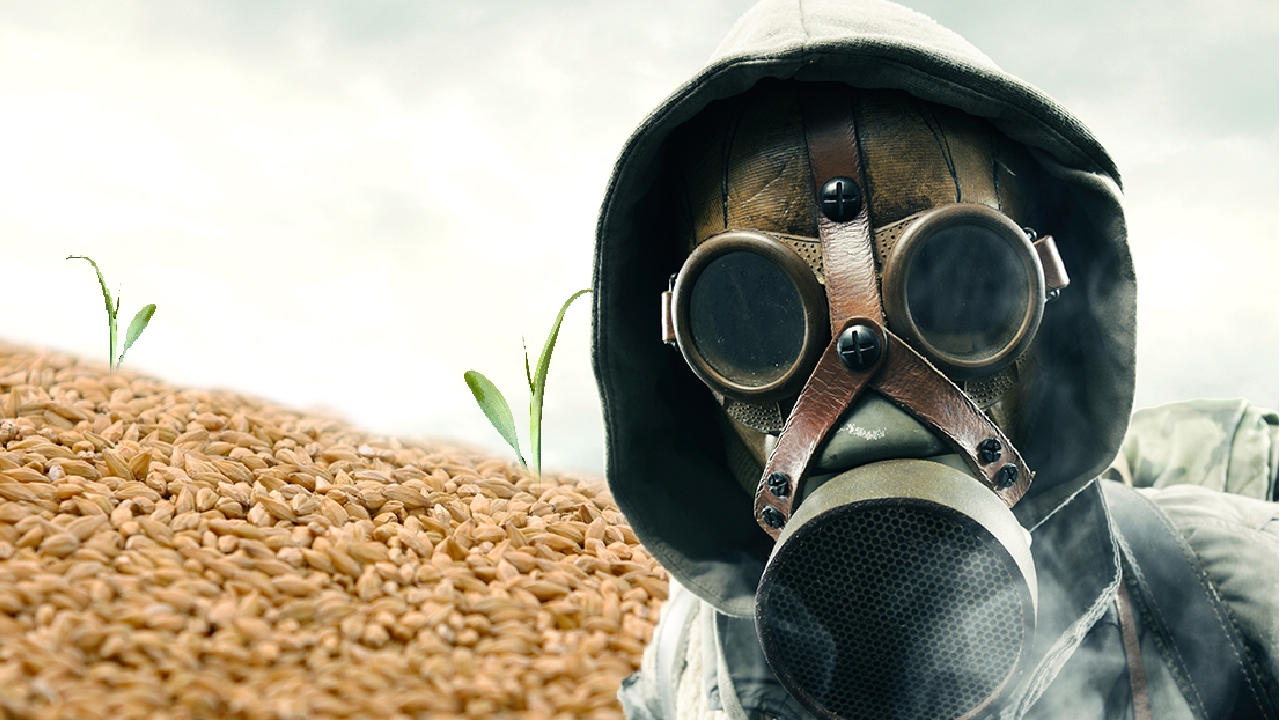 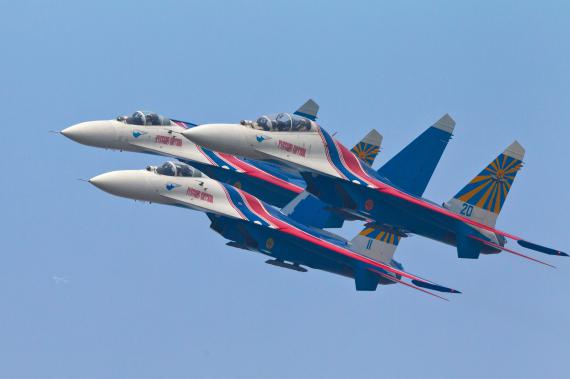