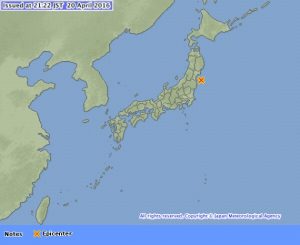 The nuclear power plant at Fukushima Japan, previously destroyed by an earthquake and Tsunami, has been hit with a Magnitude 5.6 earthquake at 8:19 AM eastern US time, just moments ago.

According to the Japanese Earthquake Center, these are the initial details:

The Fukushima-Daiichi Nuclear Power plant saw three reactors meltdown and explode in March, 2011.  Clean-up of the radiation continues to this very day, with spent fuel still remaining in some damaged fuel pools.  If those pools are further damaged, they could collapse, draining immediately, and causing a nuclear fire to erupt in the spent fuel rods.

Twitter has lit-up with reports about this quake, with users all the way south in Tokyo saying they felt the ground shake!

The quake was centered around 60 miles south east of Sendai, Honshu, near where a devastating quake and tsunami struck in March 2011.

Back in 2011, the disaster began with a quake about this size in the same area, and was followed a little while later by a massive magnitude 9.2 which generated the tsunami.  All eyes are now watching this same area of the ocean to see if history will repeat itself today. 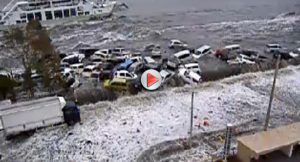 The US Geological Survey is now also reporting the quake, but at 5.8 magnitude.  Report Here 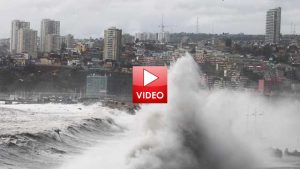