Home›End Of The Days›BREAKING NEWS: IT WAS DELIBERATE! Yellowstone Public Seismographs Taken OFF-line - Wait 'til you see why!

BREAKING NEWS: IT WAS DELIBERATE! Yellowstone Public Seismographs Taken OFF-line - Wait 'til you see why!

Being able to see what is taking place in and around Yellowstone is of great interest to many people because if there is a sudden flurry of earthquake activity, it COULD -- but not necessarily -- signal a pending eruption.

Since Yellowstone is the only "super volcano" on the North American continent, and is VERY geologically active, if an eruption were to actually take place, the western two-thirds of the United States would POTENTIALLY be hit with volcanic ash and a severe disruption of life.

The images of seismograms that appeared on SuperStation95 have always come from from the University of Utah, a.k.a. the UUSS. Sometime on the evening of April 4th, 2016, they suddenly got rid of those images. No one is able to archive them anymore or present them to you in the efficient fashion you've come to know and love.

From what we can tell so far about their changes, seismographic images have now become just "seismographic image." Every seismogram now shows only and exactly the past 24 hours of its life, as if they don't want anyone having the ability to look at its history even two days later.

The filenames don't even have anything in them anymore but the station's ID. The only way for anyone to compensate for this is to manually download each station's image once a day and then stick it in the archives. That means they'd never be live again. You'd have to go use their site to get live images. They couldn't have invented a better way to break third-party sites if they tried.

After poking around to various folks involved in the University of Utah Seismic Center, one person at that facility "quietly" e-mailed us a single graphic image which gave us pause: 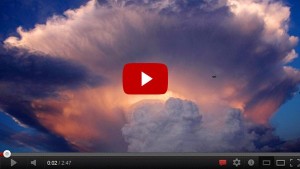 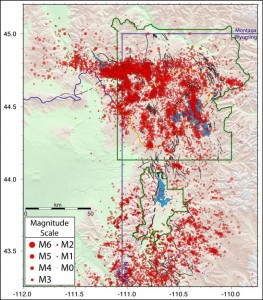 We are not seismologists, but it looks (to us) as though something is happening at Yellowstone.  We're seeking out professionals to interpret what we're seeing and will update this story when that info becomes available.

In the meantime, as untrained laymen, the red dots in the image above tell us something "not good" seems to be taking place at Yellowstone

Far beneath the ground in Yellowstone National Park, is something called a "Hot Spot."  It is a place where the molten core of the earth is closer to the surface than at other places.

As the vast North American Continental Plate shifts over the years, different parts of the surface end-up being above the "hot spot."

The image below shows the location of the "hot spot" over millions-of-years: 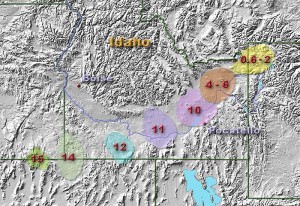 From time to time, the "hot-spot" bursts through the surface with an eruption.  These are extremely RARE occurrences, which take place - on average - every 600,000 years or so.  As of today, Geologists claim it has been about 640,000 years since the last big eruption, so by some standards, we may be a bit overdue.

The image below explains the utterly terrifying difference between a "typical" volcano and Yellowstone.

At the top left of the USA map, the gold-colored area over Oregon, Washington and Idaho shows the famous "Mount St. Helens eruption" of 1980 and how far ash was ejected from that (typical) volcano. 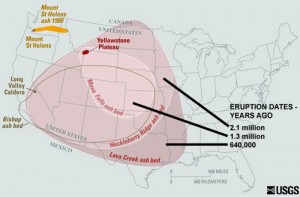 The ash is only a small part of the story.  When Yellowstone erupts, there will be an enormous "kill zone."  Inside this "kill zone" nothing . . . . absolutely NOTHING . . . . will survive. The ash in this area is known as a pyroclastic flow.  It will be so hot that anything it touches will be incinerated on contact.  Humans, animals, trees, grass, cars, trucks, buildings.  All destroyed immediately.

The next, even larger area, is called the "hot ash" zone.  Most things in this area will be ignited by the hot ash and will burn.  People, animals, cars, buildings.  There will be so much fire and so much horror, that very little will survive. 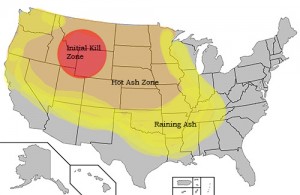 Beyond the Kill Zone and the Hot Ash Zone is the "raining ash zone."  In this area, volcanic ash with rain down for weeks!   But what is commonly called "ash" is not really "ash" at all; it is pulverized ROCK.  If a human inhales it, the rock turns into a mud-like substance in the lungs, suffocating the person to death.

The ash also clogs vehicle air filters, stalling vehicles because they cannot get air into the fuel injection systems.  When stranded motorists exit their vehicles to see what's wrong, they breath the ash, and that's usually the end of them, too. 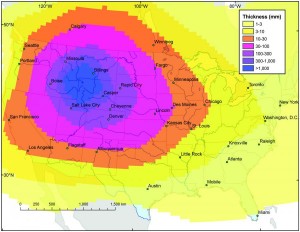 Please don't go off, half-cocked, and start calling authorities about this report because there is absolutely no need to do that; if they feel there is anything the public needs to know, they will tell us.

The purpose of this article and the intent of the authors is merely to report news of an unusual outage of important public information.  It seems wise to us to explain what's at stake if, Heaven forbid, something were to go wrong at Yellowstone.  We cannot emphasize enough, we have no word whatsoever of anything wrong right now and you should NOT panic or change your life in any way at all on account of this report.  Just be aware.  Someone decided they didn't want the public to be able to see the seismic activity anymore; at least in the manner we had all become accustomed.

Who Will Live, Who Will Die in the 1st 72 Hours-SHTF! The first 3 things to do during a disaster.You must read this book! 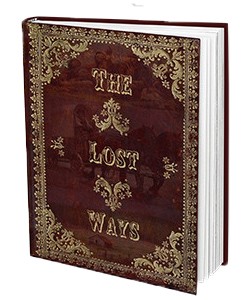 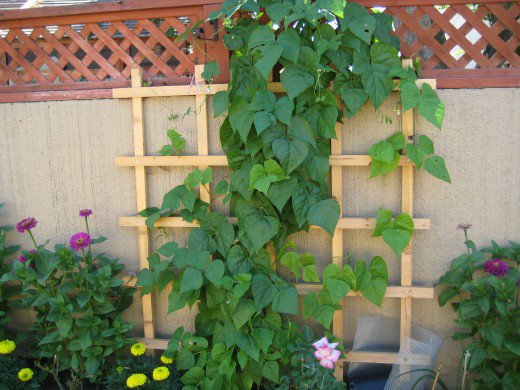