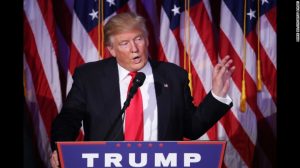 Republican candidate Donald Trump's ascension to the White House sent shock waves round the world and set markets tumbling -- but it appears to have pleased Russian President Vladimir Putin.

Within hours of Trump's acceptance speech, Putin congratulated him and flagged Moscow's willingness to fully restore ties with its old Cold War foe, currently at loggerheads over how to deal with the Syria conflict.
Russia featured heavily in a heated campaign period, with Trump praising Putin as a firm leader as US officials accused Moscow of meddling by leaking hacked Democratic emails to undermine Hillary Clinton's campaign.
Donald Trump delivers his acceptance speech on election night in New York.
"(Trump) spoke about resuming and restoring relations with Russia. We understand the way to that will be difficult, taking into account the current state of degradation of relations between the US and Russia," Putin told Russian state television.
"As I have repeatedly said, that is not our fault that Russia-US relations are in that state. Russia is ready and wants to restore the fully fledged relations with the US. I repeat we understand this will be difficult but we are ready to play our part in it."
The Kremlin earlier issued a statement saying Putin had expressed belief in building a constructive dialogue between Moscow and Washington. 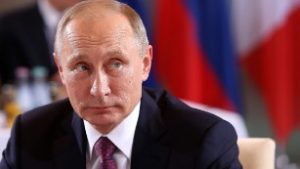 Russians have followed the US election closely and many praised the real estate mogul's victory, calling it a positive step for financial markets.
America votes
Kirill Dmitriev, head of Russia's sovereign wealth fund, said he felt financial markets would quickly right themselves.
"We believe that (a) Trump presidency offers more opportunity for global growth and reducing geopolitical confrontations through (a) pragmatic and results oriented approach," Dmitriev said, a position that likely mirrors the Kremlin's.
"A less confrontational US foreign policy will unlock major opportunities for joint trade and investment to lead to a more stable and secure world focused on growth and prosperity of its citizens."
But not all Russians were convinced. Garry Kasparov, the Russian chess grandmaster and fierce Putin critic, tweeted his reaction to Trump's victory: "Winter Is Here." Kasparov wrote a critical book about Putin called "Winter Is Coming." 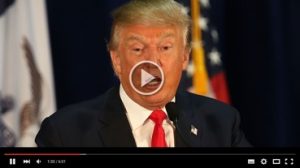 But from other parts of the world, the uncertainty about Trump, who has vowed to be an unpredictable leader, was reflected in anxious statements.
Andres Manuel Lopez Obrador, a former Mexican presidential candidate, called on Mexicans to keep calm. Mexico "is a free, independent, sovereign country. It is not a colony, it is not a protectorate, it does not depend on any foreign government," he said in a video published on his Facebook page Tuesday night.
Trump has vowed to build a wall between the US and Mexico to stem illegal immigration, and has accused the country of sending rapists and drug dealers to the US.
He has also proposed a blanket ban on Muslims entering the country.

"After Brexit and this election, everything is now possible. A world is collapsing before our eyes. Dizziness," France's ambassador to the US, Gerard Araud, said on Twitter.
Former Swedish Prime Minister Carl Bildt also invoked Brexit on Twitter, saying, "looks like this will be the year of the double disaster of the West."
As the election started, the German newspaper Die Welt reproduced the poster for the film "Apocalypse Now," but with Trump's head Photoshopped in above the film's title.
UK Prime Minister, Theresa May, congratulated Trump "following a hard-fought campaign."
"Britain and the United States have an enduring and special relationship based on the values of freedom, democracy and enterprise. We are, and will remain, strong and close partners on trade, security and defense. I look forward to working with President-elect Donald Trump, building on these ties to ensure the security and prosperity of our nations in the years ahead."
Turkish President Recep Tayyip Erdogan said: "I hope the choice of American people will be well in terms of freedoms and liberties as well as the developments of the region. I'd like to personally -- and for my nation -- interpret this positively and wish him a successful future."

Markets in a frenzy

The immediate reaction from financial markets was brutal, and US allies convened emergency meetings of their financial and security agencies to assess the impact of the shock victory.
Asian stock markets fell, with Tokyo down almost 6%. The Dow futures markets slid almost 800 points, while the Mexican peso fell to a record low against the US dollar.
South Korea called a meeting of its National Security Council as Japan's top financial officials huddled amid a 1,000-point plunge in the Nikkei stock market. Markets in the UK and France also dropped.
US futures also plummeted, as international observers grappled for analogies and images to convey their discomfort, dismay and disgust. Many referred to the shock of watching Britain vote to leave the European Union in a June referendum -- the so-called "Brexit."
In Japan, state broadcaster NHK said that, "If Trump becomes president, Japan along with other countries, are very unsure of what will happen to the economy." 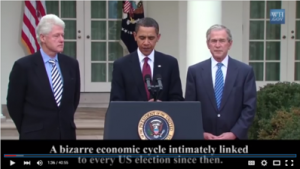 Some media organizations have turned to humor. The French newspaper Liberation wrote of Trump's projected win in connection to pot legalization also approved in several state referendums Tuesday. The headline read, "US elections: At least now they can use marijuana."
And in Britain, one of the more unvarnished global reactions came from a London fashion magazine that hich hit the streets Tuesday as Americans went to the polls, The cover featured a photo of the United States' newly minted president-elect and a one-word caption: "SH?T." 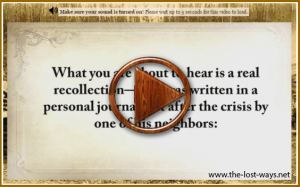 NEWS ALERT :This Is The Beginning Of ...