A Government Shutdown, A Debt Ceiling Surrender, and the Obamacare Disaster 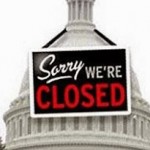 THE SHUTDOWN
Last month for 16 days the government was partially shutdown. If you listen to the Media the shutdown was the Tea Party Republicans fault. Now anyone paying attention would know this is a bold faced lie.

The Senate passed what it called a "Clean CR" And they wouldn't negotiate away from this. Now remember the whole reason we were in that position was because the Dems just finally passed a budget this year after 3years of no budgets, the one the passed earlier this year was a stinker un-passable in the House with all the spending in the budget. The House yet again passed a responsible Budget that works towards reducing our deficit. The Dems moaned about wanting to conference 18 times.

Here is what I say, there was no way the GOP was gonna conference off the Senate budget and not without leverage because Dems don't compromise they demand surrender. And since no agreement on a budget for last couple years hence why we have been getting by with Continuing Resolutions or CRs. Thus on October 1st in typical Democrat fashion they refused any compromise so the government partially shutdown. Then started the blame game as the Democrats likened the Tea Party and Republicans to Arsonists, Hostage takers, Terrorists, and the ever popular Racist. Like that would make us negotiate. They would rant and rant about how we were holding America Hostage, playing Political games, they would say we were immature, throwing a tantrum, and we shut the government down till we got our way. They refused to negotiate however until we gave into Democrats demands.

They took it further by intentionally inflicting as much pain as possible, including; stopping Veteran benefits, paying for armed guards to shutdown public landmarks and parks even for those that payed to stay at resorts in the parks, they temporarily shutdown Amber Alert, and other vital services like the Border. Democrat Harry Reid got caught telling DC mayor who pleaded to be allowed to use the city's money during the shutdown and Reid replied "I'm on your side, but Don't mess this up." That statement implies that it was the Dems that wanted the shutdown to score political points.

Its the Democrats that refused every deal and compromise offered, and only offered what they wanted and tried to ram it through. That's the Democrat idea of compromise we surrender and give them everything they want. This went on for 16 days and despite the Armageddon fervor of the left prior the world kept turning and didn't end. The GOP passed several bills to partially fund some of the areas affected such as parks, vets, etc. The Dems wouldn't touch those bills, it was their way or the high way.
But at that point another faux crisis loomed. 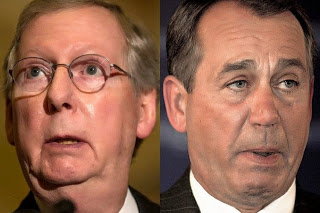 On October 17th we were due to hit the debt ceiling and as the day came close the left panicked proclaiming impending default if we didn't raise it. The truth is all that would have happened is DC would have had to work within a budget and not spend more then we take in thus prioritize spending I know that's a foreign concept on Capital Hill.

Instead the RINOs led by Boehner and McConnell surrendered everything they agreed to fund government, and give a temporary power to Obama to raise the debt limit. Included in this 11th hour surrender is an Obamcare exemption for Unions and a $2billion kickback earmark for McConnell in Kentucky.

So these Rinos sold Americans out for kickbacks, and to be liked by the Dems.

Its time to clean house of every spineless coward in the GOP, along with weasel Democrats.

So after everything, weeks of fighting and holding our ground we surrender and give gifts to the Dems, and McConnell sold us out.

This corruption needs to be cleaned up next couple of election cycles.

With October 1st past, Obama got his way and His signature achievement the so called Affordable Care Act aka Obamacare began implementing its individual mandate and the exchanges. 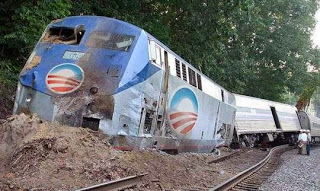 OBAMA CARE TRAIN WRECK DISASTER
After more than 3 years of propaganda and hype the bill ironically named The Affordable Care Act that was rammed down our throats in March of 2010 a bill nobody wanted began implementing its Individual Mandate and Exchanges in October. You will see the irony in the name shortly.

The moment we had dreaded was upon us Obamacare was being implemented. And what a train wreck it was. For starters for days you couldn't even get on the site due to consistent errors, if you could somehow overcome the mountain of technical errors then you had to fill out a massive partial but mostly complete application that takes hours in order to find out the prices this included bank info. And as if the glitches, and lengthy invasive application weren't enough of a nightmare, then people saw the prices.

You see the ironically named Affordable Care Act better known as Obamacare had premiums ranging from $400 to $1,000 plus a month and on top of that deductibles ranging from $3,000 to $13,000+ that's anything but Affordable as Americans discovered. So many opted out and took the fine of several thousand rather than pay the outrageous health price tag. Now if you refused to pay the fine they could suspend your license, put a lien on your house, gouge your bank account, and possible jail. 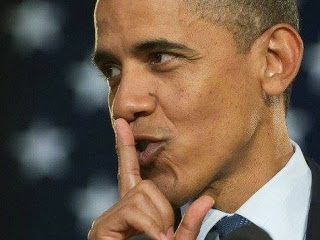 Wow unbelievable, a service Americans didn't ask for or want, we will be mandated to have by March 2014 and its not Affordable as promised nor is it easily Accessible due to the glitches and lengthy application.
As we have found out Obamacare fell way short of its registration goal by a lot. Many filled info out but opted out, most of the rest only got Medicare. So with maybe 5000 enrolled but only a few actually bought insurance.

Another outrage is that the Obamcare exchange sites are not secure with zero protection from hackers and identity thieves. In fact HHS Secretary Kathleen Sebelieus admitted that they don't screen Obamacare Navigators for Criminal records, this should be an outrage to all Americans. I wouldn't put my information on site that's not secure.

On top of that to make this train wreck even worse millions have lost their current Health Insurance.
Whatever happened to "If you like you plan you can keeo it"? I guess now the words "if it doesn't make a change or we deem it bad" thus another lie and broken promise. More double talk and doubling down on this train wreck. Oh and the icing on this mess a woman with Cancer lost her insurance and when she demanded her plan back because she liked it. She was told that her plan was bad, and Obamcare which was more expensive was better. She argued and they essentially told her she is too stupid to understand that her plan was bad and Obamcare was better. Yeah that's gonna go over well. And another broken promise about pre existing conditions too.

Now the question is was this train wreck an accident or by design? 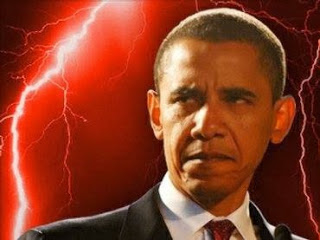 The Answer it was by design.
One just has to listen to the new rhetoric to realize this was planned. They are now going around saying that Americans that are losing their insurance are losing bad plans. The Dems are blaming insurance companies for the problems.

It doesn't take a genius to see that Obamacare is about gouging people for tax money, collapsing private insurance, this setting the stage for Single Payer Universal Health Care.

Think about it how did the techies that brought us the high tech Obama campaign who had 3 years to set this site up totally botch it? Answer they didn't its designed to fail, so they can get single payer, these people are devious and downright evil. 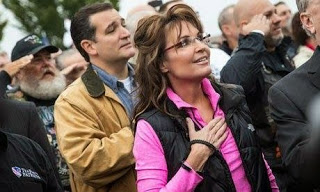 In conclusion the month of October brought us a new Hero in Senator Ted Cruz who bravely fought against Obamacare with a 21 hour filibuster. It showed us how spineless and cowardly the GOP Establishment is under Boehner and McConnell. And it vindicated conservatives with Obamacares disastrous train wreck of a rollout.
2014 can't come fast enough.